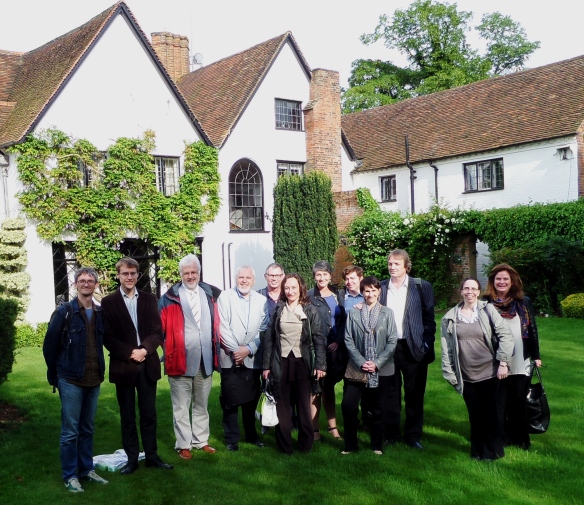 To stand in the very room where John Bunyan waited to be interrogated at Harlington manor in Bedfordshire; to follow his footsteps into the main part of the house where the questioning took place; to find the same panelling on the wall that Bunyan would have seen and the same fireplace where the fire would have been roaring that chilly November evening in 1660: this was all an extraordinary experience for twelve members of IJBS when the society held its first ever spring-day meeting at Harlington Manor on 23rd May 2014. There were members from France, Britain and the USA.

After a short train journey from London St Pancras, we gathered for a pub lunch in the village before meeting the present owner of Harlington Manor, David Blakeman. David then gave us a most interesting and erudite tour of the house culminating in the visit to the two rooms mentioned above. This was a moving occasion for us all, since for most of us it was our first visit to the house and gardens.

We then retreated to the dining room for a meeting held in two parts: Vera Camden, currently on a research trip to Dr Williams’s Library, London, spoke about her forthcoming edition of Mary Franklin’s commonplace book and ‘experience’, a manuscript of the 1680s taken up a hundred years later by her granddaughter Hannah Burton. Then David Parry presented some of his current work on conceptions of rhetoric and allegory in Puritan writings.

David Blakeman’s six-year old son Alex is currently collecting for Addenbrookes charity, so during our break, after the two papers, we were served tea and delicious cakes for a modest contribution to this worthy cause.

The second part of the afternoon was dedicated to IJBS business, according to the following agenda:

The ensuing discussion concluded that the IJBS should pursue three main actions in the next few months: (1) to encourage institutional membership by targeting libraries and institutions with Dissenting interests, (2) to place panels, introducing the society and its work, in the programmes or accompanying literature for international conferences, and (3) to institute a category of Honorary Membership. Furthermore, Bob Owens and David Walker announced plans for an Annual Bunyan Symposium to be convened conjointly by the Universities of Bedfordshire and Northumbria. Those who have seen the magnificent (and imminent) edition of The Recorder prepared by Nathalie Collé-Bak were able to give her the warmest praise and thanks, while others wait in eager anticipation!

The IJBS Harlington day was a truly memorable event, combining historical interest, research, Society business and true companionship. We hope to hold another one of these before too long! We would all like to thank David Blakeman and his family most warmly, for welcoming us to a house of such very great significance to Bunyanists, Bob Owens, for devising the magnificent programme, and the members of the IJBS who were willing to contribute in this way to the life of our Society.