On 15 August 2013, Kathleen Lynch (Folger Institute) received the Award from David Gay, chairman of the  selection committee (2010-2013), for her monograph, Protestant Autobiography in the Seventeenth-Century Anglophone World, published in 2012 by Oxford University Press. 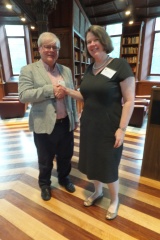 The Richard L. Greaves Award is presented triennially by the International John Bunyan Society for an outstanding book on the history, literature, thought, practices, and legacy of English Protestantism to 1700. An Honourable Mention went to Tim Cooper for his John Owen, Richard Baxter and the Formation of Nonconformity (Ashgate, 2011).